Center of the Humanure Universe

Compost toilets can provide a sanitation solution when water or electricity are not available, or when you simply want to make more compost or less environmental pollution. 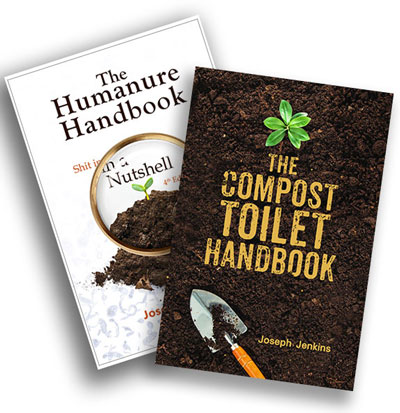 Human manure, urine, and other organic materials combinined with a carbon-based material such as sawdust, sugar cane bagasse, rice hulls or other plant cellulose materials allows the toilet materials to be converted into humus without polluting the environment or theatening public health. Properly managed compost toilets can be portable and can be located indoors.

Many of the international projects were developed by GiveLove.org under Project Director Alisa Keesey and Compost Instructor Samuel Souza.

How a humanure toilet system works.

In 2006, Joseph Jenkins, Inc. provided consulting services for the country of Mongolia via PADCO in Washington DC. The initial four week project began in late February and involved a Phase One feasibility study to ascertain the practicality of establishing humanure toilets in specific Mongolian urban areas. In Ulaanbaatar, for example, the capital city of Mongolia, there are approximately 600,000 people defecating in pit latrines. This is not only unpleasant, but it is threatening the water table that lies under the city and from which the city's drinking water is drawn. In collaboration with PADCO and with the Urban Development Resource Center (UDRC), an NGO in Ulaanbaatar, we explored the possibility of establishing humanure toilets in a least two cities: Ulaanbaatar and Erdenet.

The 2nd phase of the project took place in May of 2006, when we constructed 12 humanure compost toilets using materials we managed to acquire in the streets of Ulaanbaatar. The toilets cost a little under $6.00 U.S. in labor and materials, including one 18 liter plastic receptacle for each toilet.

We formed two volunteer groups of six families each. One group was in Ulaanbaatar and the other in Erdenet. Each member of our "pilot project" received one of the toilets. Each volunteer also received approximately three hours of training. The training included viewing a 50 minute DVD, which we produced in the Mongolian language, that showed a working humanure toilet system. They were also presented with a copy of an abbreviated humanure toilet instruction manual which each group reviewed together with a workshop facilitator. Here is the Instruction Manual in Mongolian (PDF download).

Our toilets were constructed according to the instructions from the Humanure Handbook, which are posted on the web. We had to use 18 liter toilet receptacles because that's all we could find (20 liter capacity is preferred). It was up to the volunteers to get cover materials, although we provided the people in Ulaanbaatar each with a large sack of sawdust to get started. We also provided three bales of straw for the demonstration compost bin - one bale for the "biological sponge" and two for cover material.

The results of this project were mixed. We were only funded for four weeks, which gave us enough time to do a feasibility study and to set up two pilot project groups with toilets, cover material and compost bins. However, there was no follow up. The people needed guidance, but they didn't have any. Our conclusion is that the sanitation system would work best if it were coordinated by a group in Mongolia who collected and composted the toilet material as well as provided the cover material.

Download the Humanure Instruction Manual in the Mongolian language.

In 2010, after the devastating earthquake that struck Port au Prince, we began exploring options for establishing humanure sanitation systems in the "tent cities" that sprung up and were housing a million people. This project is ongoing. We are working with the people at OurSoil.org, as well as with Patricia Arquette and the GiveLove Foundation. We will report more as time allows. Some photos and video clips follow:

Download the PDF of the Dry Toilet 2012 Powerpoint about Haiti

Download the Paper about Haiti Hot Composting presented at the Dry Toilet 2012 Conference in Tampere, Finland

Project Location: Xai Xai, Mozambique, the economic capital of the Province of Gaza, located in the southern end of Mozambique about 200 km north of the capital city, Maputo. Xai Xai is bordered on the north by the Limpopo River, and on the south by the Indian Ocean and is located at an elevation of approximately 10 meters along EN1, the main road from Maputo to Beira. The area of Xai Xai is approximately 135 km2 and it is divided into twelve administrative subdivisions known as Bairros. According to the 2007 census, Xai-Xai’s population was 104,689, or 22,950 households.

Project Goals: The primary goal of this project is to collect toilet material and other organic materials and render them sanitized such that they can be returned to the soil as agricultural nutrients without negatively impacting the environment or undermining public health in any way. As this can be achieved by subjecting the organic materials to thermophilic composting, the challenge was to find a methodology that could achieve this goal.

Summary: The composting of toilet liquid and market scraps in Xai Xai appears to be very feasible as long as a carbon-based material is available in large enough quantities to combine with the nitrogenous and wet input from the toilets. This project provides an excellent and very unique opportunity, a living laboratory, where liquid sewage can be recycled via composting. The data that can be gleaned from this project could be very valuable and have a world-wide impact. A sister sanitation project at the Tongaat Hulett sugar cane refinery could greatly enhance the quantity and quality of data collected. A parallel toilet system where the toilet contents are collected inside the toilet with bagasse and composted in bins adjacent to the toilet stalls could be established either at schools, homes, or at the sugar cane community, and the two systems (pump truck and direct compost) compared side-by-side for an even more enriching project.